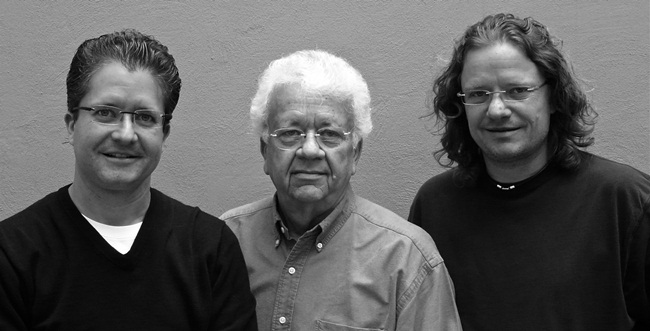 ARDITTI+RDT/architects is a talented architectural design research team that first garnered national attention when its work was featured in the book Young Mexican Architects. The firm first attained international recognition in the exhibition “New Mexican Architecture” in Madrid, Spain, on the occasion of the first Ibero-American biennial in 1998. Its work belongs to an emerging young expression of modern architecture in Mexico, their primary place of practice, and recent commissions abroad have expanded its scope and reach. Mauricio, Arturo and Jorge Arditti head the firm.

During his forty years of practice, Mauricio’s approach to the design and construction of residences has been tailored to a specific clientele with an eye towards professional excellence. He was born in Mexico City in 1938, graduated with honors from the Universidad Nacional Autónoma de México, and is a fellow of the Universidad Anahuac’s honorary board of consultant members. In 1984 he and his son Arturo joined forces, and when his son Jorge joined the practice in 1990, they decided to form ARDITTI+RDT/architects, a firm devoted exclusively to architectural design. Their experience includes a wide variety of project types—residential, commercial, and religious—and has tackled design solutions for corporate, institutional and tourist enterprises from architectural planning to interior design, according to the needs of each client.

Born in 1963, Arturo received his professional degree in Architecture in 1986 from the Universidad Anahuac in Mexico City, where he received first prize for his Calacoaya project. With this project, Arturo was invited to represent Mexico at an international student exhibition at Columbia University in New York City. Arturo is a visiting professor and critic at SCI-Arc (Southern California Institute of Architecture) in Los Angeles. He has also served as a member of the alumni board at Universidad Anahuac, where he has taught at the Master of Excellence in Architectural Design program. Arturo is a photography enthusiast, a field in which he has been the recipient of several awards.

Jorge was born in 1967, and graduated from the Universidad Anahuac in 1991. Jorge continued his education at the Massachusetts College of Art, with a focus on computer-generated graphics. He was invited to represent Mexico with his lecture at an exhibit of young Latin American architects in 1993 at the Technion University in Haifa, Israel.

Ready to start a project?
Work with Us!